Painting in the churches of Sofia

Vasil pop Radoykov was born in the town of Samokov about 1843. His father was a priest who came to Samokov from the nearby villages. Because of his patriotism he was removed from his church office by the Greek authorities. Vasil pop Radoykov had two brothers: Zahari and Sotir. The three children received their education at the local monastery school. Vasil and his elder brother Zahari were interested in painting from their early age as they exercised by copying the images of the saints they were seeing in the church where their father officiated. Although Dimitar Radoykov knew from his father that the two brothers were self-taught he assumes that they nevertheless received training at some of the local icon-painters6CDA, f. 1510к, inv. 1, а.u. 169, p. 1.. It is interesting to note that in his notes about the icon-painter Vasil Zahariev points out that he was Kosta Valyov’s student7CDA, f. 1510к, inv. 1, a.u. 169, p. 17.. Vasil pop Radoykov and Zahari pop Radoykov had craftsmen knowledge of cabinet-making, wood-carving, making of musical instruments, dyeing. They actively participated in the cultural life of Samokov8CDA, f. 1510к, inv. 1, a.u. 169, p. 1..

Dimitar Radoykov provides information about the work technique of his father. The icon-painter worked the icons following the commonly known “Byzantine” technique: tempera on a teak fundament as he sometimes also used oils. Vasil pop Radoykov sketched the figures and compositions with speed and dexterity. The images were patterned but never copied literally9CDA, f. 1510к, inv. 1, а.u. 169, p. 1 гр..

It is known that Vasil pop Radoykov performed his church commissions on his own or jointly with his brother Zahari pop Radoykov10Vasiliev 1965: 463., and later he also worked jointly with Mihail Belstoynev11Vasiliev1965: 472..

The earliest known works of Radoykov are the icons in the church in the village of Dolna Lyubata dating from 186212He signed himself only by his first name on the majesty icon depicting Christ of 1862.. Those works give A. Kuyumdzhiev grounds to cast doubt upon the year of icon-painter’s birth stated by A. Vasiliev, and namely 184513Vasiliev 1965: 456.. The quality of the icons speaks of an already well-schooled icon-painter which runs contrary to Radoykov’s age of seventeen. This makes A. Kuyumdzhiev suggest that the birth date of the icon-painter should be antedated by several years and justifies the assumption that the year of 1843 proposed by Dimitar Radoykov is closer to the actual year of his birth14CDA, f. 1510к, inv. 1, а.u. 169, p. 1..

Before the Liberation the icon-painter made two icons for the Church of St. Nicholas in the village of Stargel, District of Sofia: Christ and the Holy Mother of God with the infant Jesus as the latter is signed: “The painter Vasil papa Hristov Samokov помѧни Гди Hristo Stoichov.” In 1882, he painted five icons for the Sovereign tier of the Church of St. Demetrius in Pancharevo. In 1887 Vasil pop Radoykov created the icon of the Nativity of Theotokos commissioned by the grocers’ guild for the Belyova Church near Samokov.

Painting in the churches of Sofia

The work of Vasil pop Radoykov in Sofia’s churches can be traced from 1882 when he painted icons for the Church of St. Demetrius in Pancharevo . The church in Pancharevo was built in the period 1876–188225Todorov, Konstantinova 2011: 33.. Vasil pop Radoykov made five icons from the Sovereign tier of the iconostasis: the patron-saint icon of St. Demetrius, the Holy Mother of God with the infant Jesus, Christ, St. John the Baptist, St. Charalambos. All icons, except for the one of St. Charalambos are signed and dated.

In 1892, while the first Church of St. Nicholas of Sofia the New, which was a ramshackle building erected on the place where the saint was tied to a willow tree and stoned to death, was still functioning26Sprostranov 1906–1907: 27. Vasil pop Radoykov pained one icon of St. Nicholas of Sofia the New. It is a free standing one and is placed next to the pulpit. It is signed in the bottom right-hand corner by Vasil pop Radoykov, and the date 1 March 1891 is in the bottom left-hand corner.

At the same time the church’s board of trustees decided to commission to a good icon-painter to paint a big icon illustrating the life of St. Nicholas27Temelski 2000: 41.. The work was again commissioned to the Samokov icon-painter Vasil pop Radoykov. Seven preparatory drawings for the hagiographic scenes of that icon are kept under inventory No. 1124 in the sketchbook of the icon-painter at the Historical Museum of Samokov. Anna Roshkovska published four of those drawings as ones made by Stanislav Dospevski28Roshkovska 1994: 11-17. . However, in the sketchbook which was collected and donated to the museum by the son of Vasil pop Radoykov in 1939 it is explicitly mentioned that those are scenes from the life of the saint and that the icon is in the Church of St. Nicholas in Sofia’s Tri Kladentsi district29Sketchbook, inv. no. 1124, Samokov History Museum..

In 1897, the representative of the church’s board of trustees N. Krapchanski, in an attempt to obtain funds for the church which was under construction came up with the idea to print on paper and distribute for sale the icon of St. Nicholas of Sofia the New painted by the Samokov icon-painter Vasil pop Radoykov in 1892. It was not the author of the icon who took up the task to rework the icon into a print but Ivan Dimitrov who fully conformed to the painted image. The print was printed in 1898 in ten thousand copies30By minutes of 12 January 1899 the Sofia Bishopric decided to disseminate the print on the territory of the eparchy. See DA – Sofia, f. 1156к, inv. 1, a. u. 3, p. 3. . There is one such print in the Church of the Assumption in Obelya district and in the Church of St. Andrew the First-Called on Opalchenska Street. As a result of the dissemination of the print some lithographic copies of the icon also appeared31Vasiliev 1987: 217.. One such copy is kept at the Church of the Holy Trinity on Konstantin Velichkov Blvd. in Sofia. Thus, the depiction of the saint from Radoykov’s icon became the “prototype” for the painters after the Liberation. In this sense one can say that Vasil pop Radoykov is the author of the iconographic type of St. Nicholas of Sofia the New32Yontcheva 2020: 500..

In 1895, Vasil pop Radoykov painted the icons in the Church of St. Paraskeva, Orlandovtsi district. The church was built in 1885, but was consecrated on 14 October 1895. The majesty icons: St. Archangel Michael, St. Paraskeva, the Holy Mother of God with the infant Jesus, Christ, St. John the Baptist and St. Nicholas were made in 1895 by Vasil pop Radoykov. Almost all icons are dated. The icon of St. Archangel Michael on the north door is signed as on the basis of the stylistic characteristics of the remaining icons they also can be attributed to Vasil pop Radoykov with certainty. The apostolic icons from the small iconostasis tier as well as the icon of the bishop’s throne were painted by another, unknown master in 1897 and 1898.

The following year Vasil pop Radoykov made icons for the Church of St. Nicholas, Vrazhdebna district. The icons are not signed but in stylistic and compositional terms they are quite close to the ones from the Church of St. Paraskeva, Orlandovtsi district. The church was built in 1886 on the site of small wooden church. It was consecrated in 1897 by Father Ivan Vitkov, born in the village of Kremikovtsi33Todorov, Konstantinova 2011: 187; NINKN, С-1005-18-Iх., p. 1.. All icons from the iconostasis – majesty and apostolic ones as well as the paintings on the royal doors, the acroterion and the medallions along the trellis vine were made in 1896 by Vasil pop Radoykov34Only the icon of the Last Supper was made in 1926 by Petar Damdzhiev.. The icons on the Sovereign tier are: St. George on a horse, St. Stephen the Archdeacon, St. Nicholas, the Holy Mother of God with the infant Jesus, Christ, St. John the Baptist, St. Archangel Michael, St. Demetrius on a horse, and there is a date in the bottom right-hand corner. The royal doors are wood-carved. Two medallions are shaped on each door, the scene of Annunciation is presented in the bigger ones in the bottom. The upper ones depict the prophets, Solomon on the north door and David on the south one. In the Apostles tier the figures are depicted waist-high on blue monochrome background. All icons have a ktetor’s inscription in the bottom part of the pictorial area. The following apostles are depicted waist-high: Philip the Apostle, James the Great, Andrew the Apostle, Matthew the Evangelist, Mark the Evangelist, Peter the Apostle, Paul the Apostle, John the Evangelist, St. Luke the Evangelist, Bartholomew the Apostle, Simon the Zealot, Thomas the Apostle.

In the wood-carved trellis vine there are eight medallions with depictions of saints holding scrolls.

The acroterion is painted. Christ is depicted crucified on the cross. The images of the Evangelists are in the four ends of the crucifix. In two ripidiae on both sides of the cross are depicted full-length Mother of God and St. John the Apostle.

The icon of Christ on a throne dating from 1898 is placed on the bishop’s throne. In the church there is one icon of St. Paraskeva. Based on the style and he coloring of these two works one can conclude that they were also made by Vasil pop Radoykov.

In 1905–1906, he painted the majesty icons in the Church of the Holy Apostles Peter and Paul, Vrazhdebna district: St. Archangel Michael, Peter the Apostle, the Holy Mother of God with the infant Jesus, Christ, St. John the Baptist, St. George. The church was built in late 19th century with contributions of the residents of the entire village. Probably due to the lack of funds it was not until 1905–1906 that the icons were painted by Vasil pop Radoykov35We obtain data about the icons from the iconostasis from the archive documentation of the church in the National Institute of Immovable Cultural Heritage. See NINKN, С-1013-5-IIх, p.3..

One can say that in his work Vasil pop Radoykov specialized in creating icons and murals for smaller populated areas. Undoubtedly, his biggest commission in Sofia is the hagiographic icon for the Church of St. Nicholas of Sofia the New in Sofia’s Yuchbunar district. The church works of the icon-painter is distinguished by a unique, quite recognizable individual style. A number of commissions made by him attest the fact that he was perceived and liked by the locals. 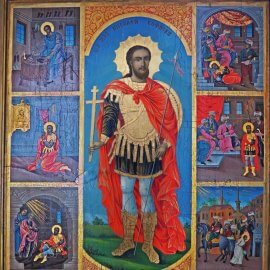 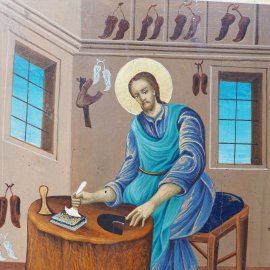 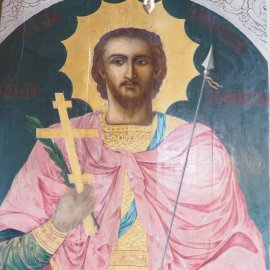 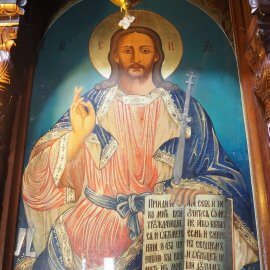 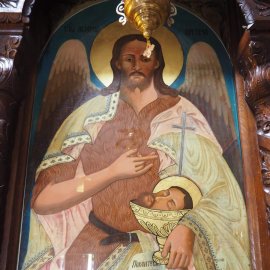 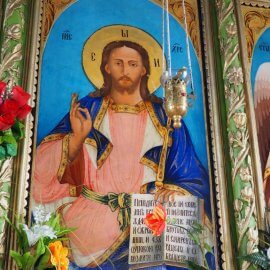 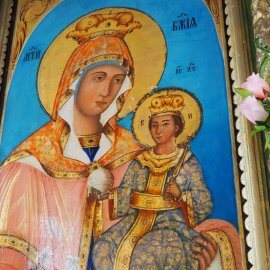 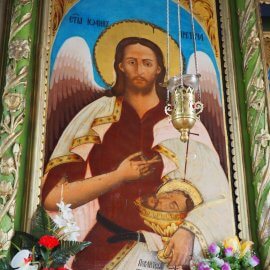 Yontcheva 2020: Yontcheva, V. The Cult of St Nicholas the New Martyr of Sofia and His Representatives at Sofia Churches in the Late 19th and Early 20th Century. – In: Art Readings 2019: Patterns, Models, Drawings. Sofia, 483-508.