The artistic work of Aleksi Mirchev is relatively understudied. A. Vasiliev published information about the wood-carver in 19651Vasiliev 1965: 254-255., and the most recent studies have stuck to what he said2Ќornakov 1986: 190..

Aleksi Mirchev was born in 1835 in the village of Osoy. He was the son of Mirche Despotov, a descendant of a family of wood-carvers from Osoy. Aleksi studied wood-carving with his father, and after the latter’s death he moved to Sofia with his sons3Vasiliev 1965: 254; Ќornakov 1986: 190..

The iconostasis in the Church of St. Elias the Prophet, neighborhood of Knyazhevo, is the only known work of Aleksi Mirchev on the territory of Sofia5For the church see Vasiliev 1965: 255; Ќornakov 1986: 190; Todorov 2004; Yontcheva 2020: 305-314.. According to A. Vasiliev he worked on the iconostasis together with his son Nestor6Vasiliev 1965: 255.. The donor’s inscriptions on the royal doors show that the iconostasis was made in 1893 when the church was consecrated7Todorov 2004; Yontcheva 2020: 305.. A. Vasiliev notes that Nestor Aleksiev made the bishop’s throne in the same church. However, the evidence of the churches in Sofia kept at the library of the Sofia Bishopric provide different information. According to that documentary source the bishop’s throne and the columbarium above the Holy Throne were made in 1893 by “the carver Filip of Galičnik in the District of Debar”8Svedeniya 1951.. Most likely the said carver of the area of Debar is Filip Ivanov Filipov. 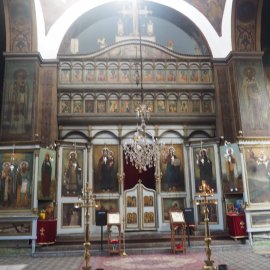 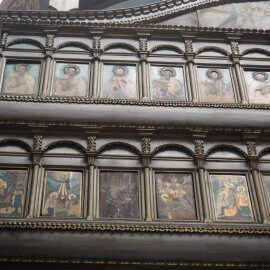