In the mid-20th century G. Traychev1Traychev 1941: 55-57. and A. Vasiliev2Vasiliev 1939: 16-17, 22; Vasiliev 1946: 262-263; Vasiliev 1965: 248-250. provided biographical information and data about the places where the woodcarver of Debar Ivan Filipov had worked. A little later D. Kornakov included information about the woodcarver in his monograph on the Mijak woodcarving of 18th-19th century on the Balkans3Ќornakov 1986: 188.. More recently, his work has also aroused the interest of researchers studying the development of woodcarving in Bulgaria after the Liberation and the formation of the so-called “Bulgarian style”4Angelov 1985: 12-13; Angelov 1992: 79; Mineva-Milcheva 2021.. There is still little documentary evidence of the life and works of Ivan Filipov in scientific circulation which could help a more thorough study of his artistic oeuvre.

Ivan Filipov was born in 1834 in the village of Osoy situated near Galičnik in the eastern part of North Macedonia.

The research so far shows that the two brothers, together with their sons, started to accept more and more often commissions for woodcarving works on the territory of liberated Bulgaria after 1880 but it is still unknown when exactly the Filipovtsi settled in Sofia. However, taking into consideration the numerous woodcarving works that could be attributed to the woodcarvers from that Debar family on the territory of the Sofia Bishopric it seems that was already a fact in the last decade of the 19th century. About that time Vasil Avramov and Filip Avramov most likely ceded the management of the works to Filip’s sons – Ivan Filipov and Yosif Filipov (1848–1913).

The first known work of Ivan Filipov in Sofia is the iconostasis for the Church of the Presentation of the Blessed Virgin15For the church see Irechek 1884: 119-120, note 2; Irechek 1974: 73, note 42; Dinekov 1937: 5, 8., referred to as “the Immaculate Mother of God” by the residents of Sofia. The church does not exist today, and the traces of the iconostasis were lost in the late 1970s.

It is known that the iconostasis was made in the period 1858–1859 by Ivan Filipov16Vasiliev 1939: 16-17; Angelov 1985: 13., most likely after the church was renovated in the mid-19th century.17Angelov 1985: 13. The damages to the Church of the Presentation of the Blessed Virgin after the 1858 powerful earthquake are mentioned in adscripts from a Menaion for the month of September from the Church of the Holy Ascension of Christ stating that after the 1858 earthquake the churches of St. Nikolas the Small One and of the Immaculate Mother of God “fell down”. See Sprostranov 1906–1907: 16-17. The church was demolished by the municipal authorities in 1891 because of the new regulation plan of Sofia18Vasiliev 1939: 16-17; Vasiliev 1946: 263; Vasiliev 1965: 250; Angelov 1985: 13., and its property was scattered in the nearby churches of Sofia19See Tabakov 2009: 9; Vasiliev 1965: 249-250.. The iconostasis, together with part of the icons and the bishop’s throne, were brought to the cemetery Church of the Assumption20Traychev 1941: 57; Vasiliev 1965: 249-250; Angelov 1985: 13. There is no information as to whether the bishop's throne was made by Ivan Filipov and no archival photographs are preserved.. It is known from the periodical press that they were bought back by the Municipality for the sum of 1,200 Bulgarian leva21Tabakov 2009: 9.. In 1966–1969, the cemetery church was reconstructed and its furniture was completely renewed22Yontcheva 2020: 482.. At that time the iconostasis was dismantled and moved outside Sofia23Angelov 1985: 13., as its present-day location is unknown.

The next commission of Ivan Filipov was for the Church of the Holy Ascension of Christ29For the church see Ishirkov 1912: 25-26; Monedzhikova 1942: 337-339; Vasiliev 1939: 17, note 1, 22; Irechek 1974: 73, note 42; Dinekov 1937: 7, 9; Krasovska, Mitanov 1979; Vasilieva 1989; Boyadzhiev 1982; Ivancheva, Stoilova 2010.. The archaeological studies show that the church of the Holy Ascension of Christ was built in the period between 9th and 12th century and underwent several reconstructions until the late 19th century.30Vasilieva 1989: 92-93. The most recent renovation of the church was after the Liberation between 1883 and 1884.31It is not known when and in what period of time that reconstruction was made. In 1884, K. Jireček wrote that the church “is remade now”. See Irechek 1884: 119-120, note 2. A little later A. Vasiliev claimed that the church was demolished in 1879 after it had been deemed “unfit”, а and new church was erected on the site of the old one in 1883. See Vasiliev 1939: 21. However, the archaeological studies show that the Church of the Holy Ascension as it was at the time of the Liberation was reconstructed and extended and was not fully demolished and no new church was erected in its place as A. Vasiliev claims. See Vasileva 1989: 93. Most likely the iconostasis of which A. Vasiliev provides the information that it was carved by Ivan Filipov was commissioned shortly afterwards32Vasiliev 1939: 17, note 1. See also Traychev 1941: 57; Monedzhikova 1942: 338. In the most recent publication dedicated to the church it was erroneously stated that the woodcarver was Petar Filipov of the village of Gari. See Ivancheva, Stoilova 2010: 300.. It was destroyed by fire in the church in 194433Vasiliev 1946: 263. and at the present there is no data of what it looked like.

The making of the iconostasis, the bishop’s throne and the pulpit in the Church of St. George in Darvenitsa district, is attributed in the art historical literature to the woodcarvers from the Filipovtsi family34Vasiliev 1946: 263; Entsiklopediya 2006: 105. See also Traychev 1941: 57.. There are no known documents related to the making of the wood-carved decoration of the church. The information about the authorship of the woodcarving works was provided by D. Usta-Genchov who wrote in 1895 that Ivan Filipov made the wood-carved works in “the newly-built small church of St. George” in Sofia35Usta-Genchov 1895: 323.. Undoubtedly, this is precisely the church in Darvenitsa which is the only Christian temple on the territory of Sofia with such a dedication built at that time36The church was built in 1888. See NDA na NINKN, С-992-5- Iх, 1; Yontcheva 2020: 286.. This testimony is also confirmed by the stylistic and structural characteristics of the iconostasis. It is a wooden one and is painted, and only the royal doors, the curve-piece above them and the acroterion are wood-carved. It has a tier of majesty icons, a tier of medallions with depictions of prophets and an Apostles tier. A stylistic analogue of the composition and the plastics of the wood-carved parts is the iconostasis from the Church of the Presentation of the Blessed Virgin in Sofia as well as the iconostasis from the Church of St. George in Yambol37Drumev 1989: 87, ill. 45, 151, ill. 39, 40а,б, 226, ill. 16., which are stated in the literature as works of Ivan Filipov. The woodcarving works in the church are not dated but the time when they were made could be specified based on indirect data. The majesty icons which were painted in 1888 provide an indication of the dating.38Yotcheva 2020: 286. This suggests that the iconostasis was made in the same year or a little while before.

The iconostases of other churches situated in Sofia have very similar stylistic characteristics. This justifies the suggestion that they were also made by Ivan Filipov. Chronologically, the iconostasis from the Church of St. Nicholas, Gorna Banya district, is the earliest one among them39It is accepted in the literature that it was made by the woodcarvers from the Filipovtsi family Traychev 1941: 57; Vasiliev 1965: 250. For the iconostasis see also Angelov 1985: 13.. There are no known documents related to the making of the woodcarving works in the church and therefore one can only indirectly judge about the dating of the iconostasis by the data about the construction and consecration of the church. The church was built in 1882 and was consecrated on 22 May 1885 by Bishop Miletiy40Yontcheva 2020: 328., and the majesty icons on the iconostasis were made in the period 1885–1887 by Alekso Vasilev41Yontcheva 2020: 329.. All of this justifies the suggestion that the iconostasis was made in the period 1882–1885.

The composition and the plastics of the iconostasis from the Church of St. John the Apostle, Vladaya district, are identical to the ones from the Church of St. Nicholas in the neighborhood of Gorna Banya which could be accepted as an indication of Ivan Filipov’s participation in their making. Most likely the iconostasis was made between 1886 and 1887, taking into consideration the information that the church was built in 1886 and was consecrated in 1887.42Todorov, Kostadinova 2011: 75; Yontcheva 2020: 371.

Church of St. Andrew the First-Called was built in 1948 on the site of a chapel erected in 1926 and destroyed during the bombing of Sofia.43Yontcheva 2020: 468. The present-day iconostasis is mason built as only the royal doors have rich wood-carved decoration attributed as a work of woodcarvers of Debar. The composition on the royal doors, the content of the ornamental decoration and the stylistic characteristics are very similar to the woodcarving works of Ivan Filipov’s from the late 19th century and early 20th century, which might be accepted as an indication of their dating.

The stylistic and structural characteristics of the iconostasis from the Church of the Holy Trinity, Botunets district44On the work of Filipovtsi, without specifying a woodcarver’s name, wrote Traychev 1941: 57.are also similar. The church was built in 1904 and consecrated on 26 March 190545Yontcheva 2020: 409., and the majesty icons were made in 1906. This suggests that the iconostasis was most likely made in the period 1904–1906.

The iconostasis from the Church of the Assumption, Obelya district , which was made by woodcarvers from the Filipovtsi family, as stated in older literature, has similar stylistic characteristics49Traychev 1941: 57; Vasiliev 1965: 250.. Based on the stylistic and compositional characteristics one is allowed to suggest that the work was led by Ivan Filipov. 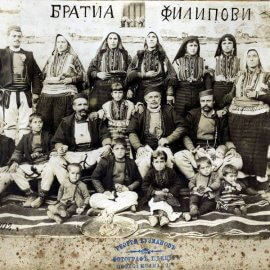 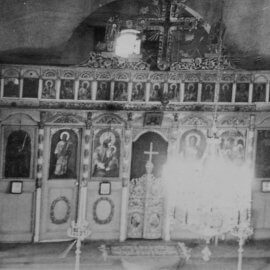 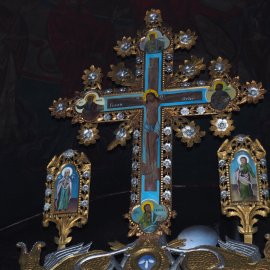 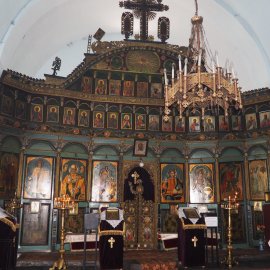 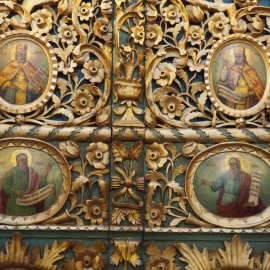 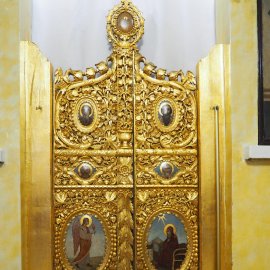 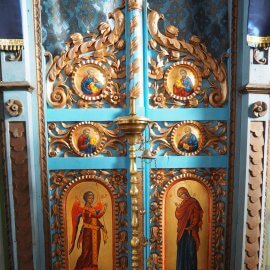 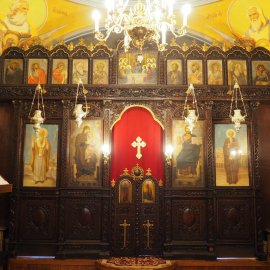