The work of Petar Yosifov Filipov is examined in parallel with the work of the other representatives of the Filipovtsi family of wood-carvers1Traychev 1941: 56; Vasiliev 1965: 247; Angelov 1985: 12; Ќornakov 1986: 188; Gergova, Genova, Vanev, Zaharieva 2017: 132.. There is no stand-alone research on his works in the churches of Sofia. There are still relatively few works and little documentary evidence in scientific circulation that would supplement the woodcarver’s artistic biography.

Petar Yosifov Filipov was born in 18832Vasiliev 1965: 247. and was among the last wood-carvers from the Filipovtsi family who worked in Sofia. He is the son of Yosif Filipov3Yosif Filipov (1848–1913), a wood-carver, Ivan Filipov’s brother. It is not known whether he took part in the carving of the church furniture in the churches of Sofia. For him see Vasiliev 1965: 247, 248; Ќornakov 1986: 188. and cousin of Filip Ivanov Filipov with whom he worked. Apart from Filip he also did church furniture in a team with other woodcarvers4The information about that is provided by G. Traychev. See Traychev 1941: 57..

Petar Filipov participated in the carving of the iconostases the church at the nunnery of the Zograf Monastery in Plovdiv, the churches in Karlovo, Koprivshtitsa, churches in the District of Pazardzhik and in Kardzhali5Traychev 1941: 56.. In 1911, Petar Filipov made the iconostasis in the Church of St. John the Forerunner in Bratsigovo where he left his signature6Vasiliev 1965: 250, note 1.. It is also known that outside Sofia Petar Filipov worked on the iconostasis in the Church of the Assumption in the town of Lom jointly with other wood-carvers from the Filipovtsi family7Gergova, Genova, Vanev, Zaharieva 2017: 132..

The earliest participation of Petar Yosifov in the decoration of the interior of the churches in Sofia dates to the period 1902–1903 when he made jointly with Avram Avramov the royal doors and the acroterion for the iconostasis of the Church of Sts. Heptarithmoi8Vasiliev 1965: 249; Koeva, Yokimov, Stoilova 2002: 439. at 25 Graf Ignatiev Street. The iconostasis in the church is masonry-built and is decorated with rich plaster decoration. The majesty icons which are exactly dated to 19039Yontcheva 2020: 461. The church was consecrated on 27 July 1903. See Kalev 1979: 86. show that its construction and decoration started immediately after the reconstruction of the Imaret Mosque into an Orthodox church in 1899–1901.10Yontcheva 2020: 459. Only the royal doors and the acroterion are decorated by woodcarving. According to A. Vasiliev the commission was performed by Avram Avramov and Petar Yosifov in 190211Vasiliev 1965: 249. while V. Angelov assumes that the work may have been completed in 1903.12Angelov 1985: 12.

Avram Avramov (1846–1910) is another representative of the Filipovtsi family. He was the son of Vasil Avramov and cousin of Yosif Filipov13Vasiliev 1965: 247. . Under that commission Petar Yosifov, who was just 20 years old at the time, most likely participated as an assistant to his uncle in the woodcarving of the royal doors and the acroterion.

In 1903, the same team took up the making of the church furniture in the newly-built Church of St. John of Rila in the Theological Seminary. G. Traychev14Traychev 1941: 57. and A. Vasiliev15Vasiliev 1965: 249. See also Koeva, Yokimov, Stoilova 2002: 443. mention that the iconostasis in the Church of St. John of Rila at the Theological Seminary was made by woodcarvers from the Filipovtsi family but a more specific piece of information about the authorship is provided by V. Angelov according to whom the iconostasis was made in 1903 by Avram Avramov and Petar Yosifov Filipov16Angelov 1985: 12.. The dating of the iconostasis is confirmed by the majesty icons which are exactly dated to 1903 as well as by the fact that the church was consecrated on 26 October 1904.17Didov 2003: 2; Yontcheva 2020: 346. At this point it can also be suggested that Petar Yosifov was not in charge of the commission but rather assisted his uncle.

Several years later Petar Yosifov made the iconostasis in the Church of the Holy Resurrection of Christ, Chelopechene district, jointly with Lazar Aleksiev19Vasiliev 1965: 250, 255, note 1. The work of the Filipovtsi family in that church is also mentioned by Traychev 1941: 57., a hereditary wood-carver from the Mirchevtsi family from the village of Osoy. The construction of the church was completed in 1910, and it was consecrated the following year20Yontcheva 2020: 379.. The icons from the iconostasis were made in 191221Yontcheva 2020: 380. which means that the iconostasis should have been made in the period between 1910 and 1912. Not much is known about Lazar Aleksiev except that he is the son of Aleksi Mirchev of the village of Osoy and that he assisted his brother Nestor Aleksiev in the making of the iconostasis in the Church of St. Nicholas of Sofia the New22For the Mirchevtsi family see Vasiliev 1965: 253-256. See also the article on Aleksi Mirchev in the Artists section of this website.. From what is known so far about Lazar Aleksiev it seems that he did not accept commissions for wood-carving works on his own in the churches of Sofia. This suggests that most likely it was Petar Yosifov who led the carving of the iconostasis in the church of Chelopechene. 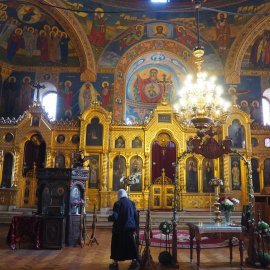 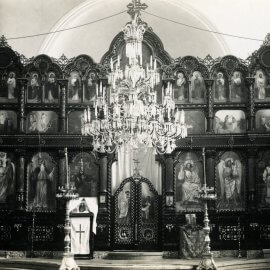 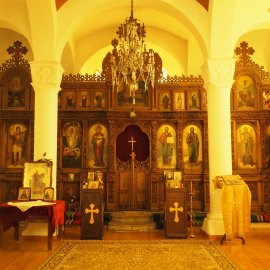